lots of novels! which is very usual for me- less usual is that i’m not reading any poetry/plays on the side. i want to get back into my paradise lost-in-the-morning-&-poetry-at-night routine. but in the meantime: lots of novels.

-THE CASTLE OF OTRANTO. as a gothic lit hoe it’s positively disgraceful i hadn’t read this before- the sui generis gothic tale! it’s silly & overblown & absolutely throbbing with erotic excitement over manfred’s quasi-incestuous pursuit of isabella (who is actually a pretty cool character, with just the amount of headstrong-ness required to avoid getting raped in a gothic novel). an observation: it is the men, here, who are the object of the narrator’s sexual excitement. manfred more so than theodore, who is really just a delightful stained-glass pretty boy, but theodore certainly more so than isabella, matilda & hippolita- who tend to come under the rather damning lens of ‘beautiful virgins’, sterile, doomed, & unfuckable as snow. now manfred is an awful, whingeing, corrupt adult baby of a tyrant trope- but his sexual appetites basically steam off the page. so, kinda like the caliph in vathek (the author of which was, to our modern understanding, bisexual). now i’m not making any assumptions about the proclivities of persons long-dead (& in any case, our modern classifications for sexual preference are just that- modern- & clumsy when dragged into the past, where sexuality was often regarded as something fluid).

on another note, the symbolism is a reason to read it in itself- it’s wild & outlandish & totally ridiculous. a sword that takes a hundred men to lift, a helmet so huge the hero is imprisoned under it- the trappings of medieval romance have become pressures & weights upon the heroes, a burdensome narrative inheritance, as though the Gothic genre, even here in its first conception, is already outgrowing its own tropes, decaying, getting wise to itself (curiously precursing the 1890s decadence).

also, LOOK at this folio edition i got from my university library. inconvenient in seminars, but hand-marbled & i am in LOVE. 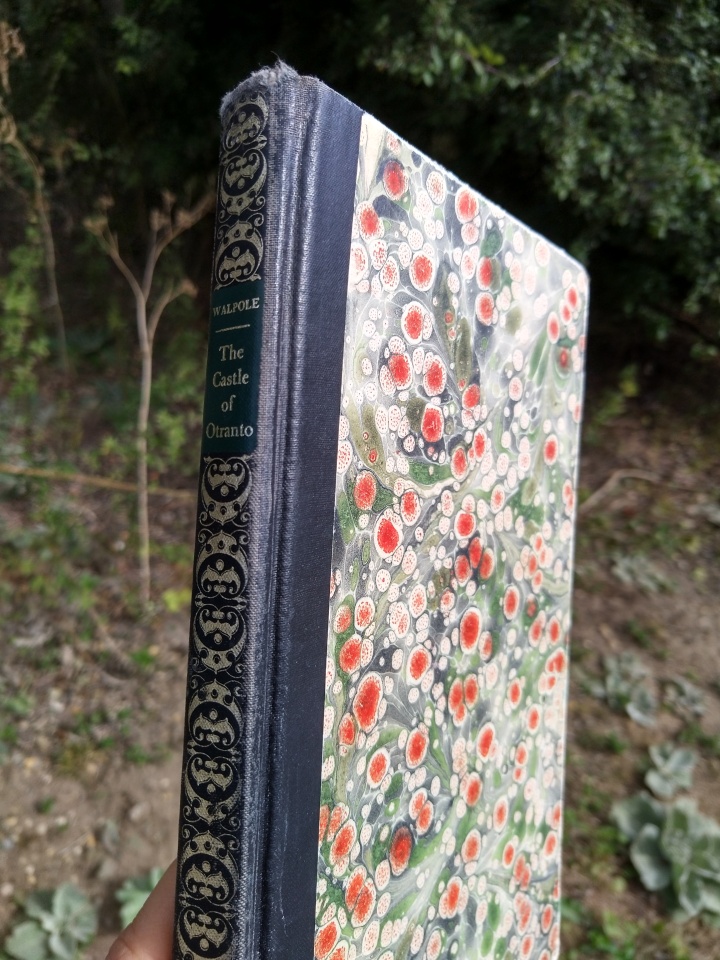 -A GLOVE SHOP IN VIENNA & OTHER STORIES. i am on a huge eva ibbotson kick at the moment. i love her adult novels. she is a deeply old-fashioned writer with a tender ironic voice. she wrote about the same tropes & themes over & over throughout her work- russia comes up over & over again, poetry, the rainforest, art… they’re hugely romantic books in many ways, sweeping fairytale romances, but they’re always grounded in the oddities & foibles of real life (as well as wonderful casts). this is a lovely short story collection- i deliberately stretched out my reading of it because i didn’t want to finish it. it has a little bit of everything i like about her work scattered through.

-THE SORROWS OF YOUNG WERTHER. i have been putting off reading this for a long time. it’s a Romantic novel, full of the ecstasy of the green world & the stars… the narrator falls passionately in love with chesnut trees, peasant villages… & of course the charming (& very engaged) lotte. but- having never read any goethe before- i was surprised at how modern, how psychological it felt. it belongs to the same race of books as the hill of dreams & a hero of our time– deeply internal novels concerned with art, ego, the male id.

-ARISTOTLE & DANTE DISCOVER THE SECRETS OF THE UNIVERSE. i read most of this in the hours between eleven-thirty & one a.m a few days ago. i wish there were more young adult novels like this. i think it’s largely well-known for its major inclusivity points- i can’t say i’ve ever read a novel with queer & authentically portrayed mexican protagonists before- but there’s more to it than token teen angst, although there’s plenty of that. carefully drawn parents, two wonderful romantic leads, prose that occasionally tiptoes into the realm of the genuinely poetic… the buzz is deserved. it reminds me of jerry spinelli’s stargirl, a similarly lovely & unique y.a novel deeply concerned with the glinting loneliness of the desert.

-OOLA. now i hardly ever read recently published literature. not out of snobbery, it’s just not an area i know a whole lot about & it isn’t where my interests lie. but i picked this up in the library, looking for something different, & hoo boy did i get it.

this book is a deep deep pit of complexities to do with the thing we call romantic love, its relationship to the jealousy of one little girl for the life/body/mind of another, the pure virgin vs the seedy real girl whose life is a detrius of tampons, toenail clippings, sandwich crusts. the book’s narrator, a privileged white boy writer, has a lot of feelings about all this- & the book GOES THERE in investigating them. it isn’t afraid to get truly truly queer with it, genderbending, toying with reality, with the narrator’s (always doubtful) credibility. the prose is lush & gorgeous & (so gratifying for me) deeply evocative of the wild fleabag youth of now, of being twenty-two & sitting on a table wearing nothing but a rain poncho to eat an avocado with your fingers, of the indie scene, of the aesthetic aimlessness of a generation who feel the end of the world bearing down upon them & so why not laze in a patch of sun on the floorboards of a house that doesn’t belong to you & read about aliens?

anyway, in true wild fleabag youth fashion, i now have to venture out into some rather stormy weather in pursuit of free food for students at brewdog with my band of similarly scabby gay bar veterans. what have you guys been reading? anything fun? also, does anyone else have the fucking lurgy? i’ve come down with the most hideous cough/cold combination, attended of course by frequent nasal haemorrhages.

i discover portrait mode
new pone who dis
@chloeursic n i looking like a shakespearean duo
ghost?
it's spring and im on holiday and surely nobody must be sick of me with lilac hair yet!!
s p e l d h u r s t